skip to main | skip to sidebar

*This is such a sprawling topic that I've only glanced on some of the main aspects. Please click on the links throughout the post for further information, or leave a comment and I'll post more links.*


I don't see an interest in death as morbid, more so a realistic acceptance of what eventually happens to everybody. That being said, some aspects of death are a little more, um, palatable. Each to his/ her own, but as a jewelry lover, I am fascinated by the use of jewels and tokens to mourn. The zenith of this trend came during the reign of Queen Victoria, in England. I'm pulling the information from all these great websites. Honestly, I could rewrite in my own words, but they said it pretty well and that just makes me feel like I'm back in school. 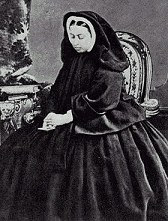 "The Victorian age was named for England’s Queen Victoria. She took the throne in 1837 and died on January 22, 1901. Victoria’s husband, Prince Albert, died of typhoid in 1861. During this period of forty years, the Queen was in mourning. She remained in full mourning for three years and dressed the entire court that way. The Victorian era reflected the Queen’s prudish ethics as well as, most visibly, her personal taste in mourning.
Victorian mourning fashion was aimed mainly at women, widows in particular. The fashion had a way of isolating a widow in her time of need just as the Queen had done. For the first year, a woman who was in mourning was not allowed to exit her home with out full black attire and a weeping veil. Her activities were initially restricted to church services. But mourning attire was the perfect way to show the wealth and respectability of a woman. Some went so far as to dress their servants for mourning when the head of the household passed away. Middle and lower class women would go to great lengths to appear fashionable in times of mourning. Dying clothing black and then bleaching them out again was quite common. The industry of mourning became so vital to tailors that rumors were spread concerning the bad luck of recycling funeral attire. Hair art also developed in the Victorian era to allow family members to keep mementos of their departed loved ones."
From: Victorian Mourning Garb

If you should wish to read up on the intricate mourning rituals adhered to at this time, here are two interesting fiction books that have large sections about it:
1. Angelica, by Arthur Phillips
2. A Poisoned Season, by Tasha Alexander (this is part two of a series, but you don't really need book one. It's not that great, anyhow. Two is much better.)


Which leads us to hair jewelry... 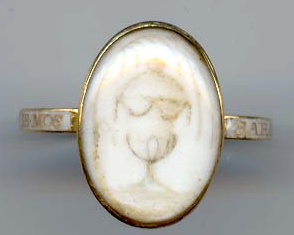 "The image on this ring is very severe and stark. It evokes a deep sense of loss when you look at it. The top of this ring has pale blonde hair work on ivory and depicts a memorial urn against a stark white background. Around the shank of the white enamel ring is: "Sarah Bottomley ob 6 Nov 1780 ae 18 mos" 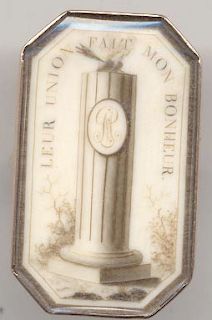 "Their union makes my happiness hair work ring: The entire picture is made from hair work and placed on an ivory background. There is a rim of hair work all the way around the ring acting as a frame for the memorial imagine in the center. On top of a column are two entwined hearts with an arrow through them. Arising from the two hearts are eternal flames. Two entwined initials can also be seen on the column. Written around the ring, in French is "Their union makes my happiness". Even these words are made from hair. The setting is 9kt. rose gold."

Hair jewelry became one of the more popular remembrances. Photographs were not yet available, and miniatures (small portraits) were not easily acquired on a mass level. Hair jewelry, however, became both a tribute and trend. The pieces were created by hairworkers, though at the time, some concern revolved around whether or not the loved one's hair was actually used. The hair was displayed in a number of ways: weaved, twisted, braided, cut and designed into scenes. 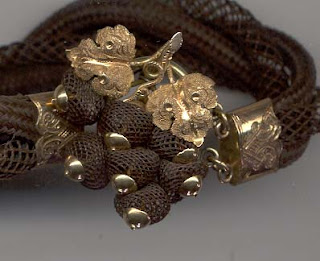 
"Hair jewelry functioned as a keepsake of the dead and as a memento mori, a reminder that death was an ever-present possibility; the wearer was constantly reminded that she should lead a good life because death could strike without warning. Often a wearer would add more hair pieces to a glass-covered brooch when additional relatives or friends passed away. Hair jewelry was not always worn to commemorate the dead; lovers also wore pieces made from the couple’s hair."

From HISTORY OF HAIR JEWELRY IN VICTORIAN AMERICA, Curated by Amy Karoly

Jet was a popular mourning stone; it had a shiny, sharp looking surface, though it was actually black fossilized wood. (French jet was made of black glass.) It's color alone had a big hand in it;s popularity. Victoria inspired a new black world. Onyx also rose in prominence.

Jet Anchor Pin, $300: "Anchors were popular as a mourning motif, sometimes representing a loved one lost at sea or referring to the three symbols of Christianity: Faith, Hope & Love, with the anchor representative of Hope. In this gleaming large scale carved Victorian Whitby Jet Brooch the anchor becomes an unforgettable example of Victorian Jewelry at its best. (c. 1850-1860) The shiny jet is jointed to form this design. The stem of the anchor fits into the top and bottom pieces." 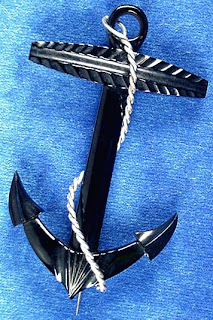 "Jet was a very soft substance which enabled the craftsman to carve and engrave without much difficulty. It also takes a high polish. Not all jet was polished, some of it was made with a dull matte finish. Jet is very light in weight and massive pieces of jewelry were fashioned from this material. In the United States, too, at the time of the Civil War, people commemorated the deaths of their loved ones by wearing black jewelry. By the 1880's, new material (*such as Onyx) were being used in place of jet."

Jet Mourning Pendant, $50 (Not sure if this is vintage, but it's lovely)


As with all things, mourning jewelry fell out of style once the reign of Victoria ended. Also with all things, this jewelry has seen a reemergence both with professional vintage jewelry collectors, and people like me, who take a fancy to some of the pieces I see around the Internet.

This entire post was actually inspired by the modern take on mourning jewelry: 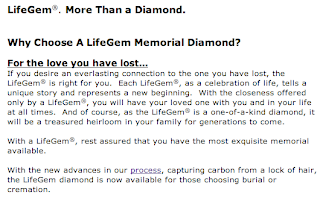 Interestingly, the above capture notes that the carbon can be pulled from a lock of hair. Things always come full circle, I guess. They also use the ashes from cremation.

I'm on the fence about this. Though some people think it is awful, I can't see how it's much worse than Victorian mourning jewelry. I can almost see the comfort, especially as someone who finds joy in jewelry, in having your loved one made into a ring.

And for those pet lovers out there, you can have little Scruffy turned into a lovely diamond as well! Part of me finds this disturbing and the rest of me thinks that it's sort of sweet.

Here's the site, if you're intrigued, along with the prices: LifeGem .

Things Gone By had all of the beautiful hair pieces pictured above.

This is an interesting article on hairwork jewelry: Remembering a Loved One...
Posted by In Yr Fshn at 12:05 PM

Aw shucks, Wendy! I didn't know a ton about the subject, so please let me know if I missed anything. God, this was the hardest post EVER!

I LOVE Victorian mourning jewelry. And remember in Sense and Sensibility when everyone was trying to tell if the hair in Lucy Steeleh's ring was the same color as Edward's?

Great post! I learned a lot reading it. This must have taken you a long time. I love hair jewelry too, very interesting to think about...

Wow, this is a really great post. Thanks for all the time you put into it! That hairwork bracelet is amazing.

Sarah, I can't believe I forgot to include S&S! Btw, have you ever read Barbara Pym? I generally recommend her to people who love Austen. I'm working on a post, but it may take a while... She's this incredible British writer from the 1940's-1980's who wrote "comedy of manners" novels. Lots of vicars and widows and church jumble sales. Excellent Women is a good place to start.

Lady N. and Lillian, thank you! I'm glad you got something out of the post. I actually learned a ton as well.

Wonderful post. I always thought this trend might have also had something to do with the fact that death was so immediate prior to the current day--it happened at home and unfortunately it happened often.

I think I'm a bit creeped out by the LifeGem thing but I can understand on another level why someone would want to do that.

I will check her out!

wow i never knew you could use remainings from your beloved animal carbons to make jewelry. It's kind of sweet to always have something to remeber them by i suppose. Thanks for the post! It was great!

wow!! this is such an informative post, the jewelries are very creative, great work :)

Ambika: Thanks! I agree with your theory. I actually admire how death was so a part of their lifestyle. It seems very sterile now.

Shaz and Theresa, thank you!

YOu and Wendy are my fave jewelry historians! you girls update my jewelry ignorance and i love it :)
Thanks for this post

Great subject. I believe the word "Memento Mori", or "Remember you are mortal", started in Roman times where a slave followed behind generals as they marched through the streets saying "Memento Mori"; reminding them that today you are on top, but tomorrow you will be dead. It was/is the basis for still life- this is why fresh fruit is often the subject.

As for diamond synthesis, It is not actually possible to make a diamond out of human remains. Really, the companies most likely use carbon power and add maybe 2% human ashes.

I like the rings, I wonder old styles were also very amazing, you can were it even in today's fashion and style.